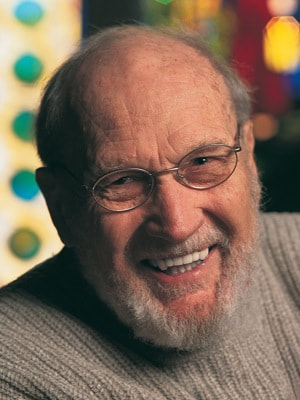 We are deeply saddened to report that our mentor and friend to all,  Ira Zepp, who inspired generations of students to lead lives committed to service, activism and peace, died Saturday, August 1st, 2009, at the age of 79.  A memorial service was held at 2 PM on Saturday, August 29th 2009, in Baker Memorial Chapel on the McDaniel College campus.

​Ira G. Zepp is a professor emeritus of religious studies at McDaniel (formerly Western Maryland) College.  After Graduating from Western Maryland College he received his theological degree magna cum laude from Drew University and his Ph.D. from St. Mary's Seminary and University in Baltimore.  He has studied theology in Edinburgh, Scotland and Gottigen, Germany as well as the Hebrew University in Jerusalem, the Hartford Seminary and at CIDOC in Cuernevaca, Mexico.  Zepp also spent a summer studying Christian-Marxist dialogue in Eastern Europe and was a Fulbright scholar in India in 1967.  He has received McDaniel's Distinguished Teaching Award three times, and in 1989 was named Maryland's Professor of the Year as well as National Gold Medalist by the Council for the Advancement and Support of Education.  He is a founding Director Emeritus of Common Ground on the Hill. The Ira & Mary Zepp Center for Nonviolence and Peace Education is a program of Common Ground on the Hill.

I am deeply saddened to report that Ira Zepp, 1952 alumnus and Professor Emeritus of Religious Studies, who inspired generations of students to lead lives committed to service, activism and peace, died Saturday, August 1, at the age of 79.

Ira joined the faculty in 1963, first as Dean of the Chapel, then as full-time Professor of Religious Studies, and continued to teach full time until his retirement in 1994. His electrifying courses on taboo topics like human sexuality, death and racism, and his serious scholarship on a wide range of subjects, from Dr. Martin Luther King, Jr. and Malcolm X to the culture and religion of Islam, earned him much popularity and esteem.

An ordained Methodist minister, Ira attended to the heart and soul of the campus community, presiding at weddings and funerals, and offering invocations, comfort and wisdom during pivotal moments in history, from the assassination of the Reverend Martin Luther King, Jr. to the terrorist attacks of September 11, 2001.

“Ira will be deeply missed and long remembered by everyone in our College family. He embodied the essence of the College, touching and often changing the lives of those who were fortunate enough to cross his path,” said McDaniel College President Joan Develin Coley, a friend and colleague for more than 35 years. “Ira was a gifted and devoted teacher, a true humanitarian who gave unselfishly of himself to make this world a better place for all. His legacy of peace and love and justice will surely live on.”

A three-time winner of the Distinguished Teaching Award and the 1989 Maryland Professor of the Year, Ira viewed teaching as a religious experience. “There is a Zen-like quality to teaching, or being intensely there,” he explained in an interview for The Hill magazine. “Teaching is loving affirmation of all students, which bestows value and worth and allows them to believe in themselves.”

Author of a dozen books, Ira’s most recent was published in the spring and explores diverse definitions of the art of teaching and examines the intimacy of human relationships in pursuit of wisdom. Pedagogy of the Heart is underwritten by former student and longtime colleague, Harvard Professor David Carrasco, Class of 1967, and is illustrated by another former student, Ellen von Dehsen Elmes, Class of 1969, whose mural celebrates the lives of Ira and Mary Zepp and currently is displayed in Hoover Library.

Ira always wrote from his heart, no matter how controversial his point of view.
In a 1965 column for the campus newspaper, he argued for the acceptance of gays. Daughter Jody Zepp said her parents’ advocacy of civil rights was unpopular in their Westminster neighborhood of the mid-1960s. The family received hate mail and dirty looks from neighbors who didn’t like the sight of black guests at their house.

“By virtue of taking stands you will have some people who are on the other side. I’ve made enemies, but I never think of them as enemies,” Ira said. “I will love the hell out of them, or better yet, heaven into them.”

Ira performed hundreds, perhaps more than a thousand, wedding ceremonies for McDaniel alumni and was married for 57 years to Mary Dodd Zepp, Class of 1949. Together, the Zepps raised four children while sticking together through the civil rights movement — which often took Ira away from the family when he participated in non-violent activism and marched in Selma, Alabama, with Dr. Martin Luther King, Jr. — and the feminist movement, which changed the dynamic of their relationship when Mary started a career as an elementary school teacher.

“We’re on our fifth marriage now,” Ira once said, referring to the distinct stages of his constantly evolving relationship with Mary. He liked to tell younger couples, “If you think you love each other now, come to me in 30 years and we can talk.”